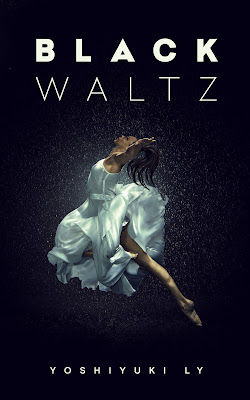 As a Black Waltz—a magical ballet dancer—Stella Azrith appears to all as a composed, no-nonsense sorceress of notable talent. Yet she is deeply dependent on her muse for far more than most artists, complicating her relationships. Nyte Lysander is a suave, emotional cellist who once struggled in her obsession to stay in Stella’s world. She and Stella find one another again after a tumultuous breakup, needing the other for reasons warped beyond the norm. Black Waltz is a sprawling urban fantasy romance set 350 years after The Scorpion’s Empress and 100 years after Venus and Lysander, concluding the trilogy. Can be read as a standalone.

Searching for acceptance, Stella and Nyte learn to understand each other anew, strained only by disagreements past and unspoken. Nyte’s living situation in the crime-ridden district of Maleficus in the city of Eden pushes her and Stella to pursue better artistic opportunities elsewhere. As they toy with the idea of exploring a power play relationship, they learn about a greater evil that threatens the Azrith and Lysander families. The true enemy twists on its head through whirling rainstorms, driving Stella and Nyte to prove who and what they stand for.

There can be no waltz for three.

EXCERPT
I had to stop myself from pulling Nyte inside with me.

“So…” she trailed off. “Stella…what do you wanna do—” Nyte gestured between us; “—about this?”

And yet I had to be honest with her.

I reached up, wrapping my arms about Nyte’s lean shoulders. I palmed the space between her shoulder blades with one hand; the back of her head with the other, trailing my nails through her short hair. The smoothness of her slicked back locks was such a lovely contrast to the precise, trimmed strands of her fade along the sides.

Nyte moved into me as she held my waist. She let me cradle her head in my hand, backward, as she breathed along my ear. I heard her comfort. I listened to the way she lost herself in my hold. I felt the slight tremble of her body against mine. Nyte tried to control herself, now that she had fallen past her pride.

As much as I loved this, I couldn’t linger here. Conflicting forces worked to confuse me. I wanted Nyte. I wanted her.

But I couldn’t live in both worlds: here, in this undeniable closeness with her, and there, onstage, or practicing, or simply in my room, fantasizing about all the ways I knew how to express myself with dance. The one thing that drove me, that moved me, was my muse, as the one flame that burned endlessly within me.

REVIEW
This is an epic love story with a capital E. Stella is a fiercely independent woman who still wants to be coddled. Nyte is as devoted as devoted can be. And the romantic tension doesn’t stop there. Stella has another love, and there are so many secondary couples. Heads up, they all seem to be f/f couples with plenty of tension. The secrets and alliances and even the drama are off the scales.

I discovered after I took this for review that it was third in a series but that it could be read as a stand-alone. Even so, I feel that reading the first books would have provided some much-needed answers. There’s so much going on in this book, which I think is both it’s greatest strength and biggest weakness.

First, strengths. If you’re looking for a book to fall into and get lost in, this is the book. The many relationships are a tangled web in their own rights. Not all are romantic either. There is jealousy and lust, sure, but there’s also political strife and familial drama. The setting, too, is exquisite. From the bad section of town to palaces, this book goes everywhere, and it’s all described so well.

On the flip side, there were many things that left me confused. Some of these may have been resolved if I’d read the first two books, but if this truly can be read as a stand-alone, at least some of these should have been explained. Stella’s second love is her muse, which is thought to be an entity only inside her mind and heart. Come to find out, her muse actually has a physical existence, but this person, who is their own person, is also part of Stella somehow. I wasn’t exactly sure how that worked and tried not to think too much about it, especially after they started being intimate. Also, the character descriptions suggest diversity, with varying skin tones and cultural references, but all the names (both characters and places) seem to be Greek. There are angels and devils that wage a battle of some kind. All the main couples are two women. Some are married, but some have husbands and some wives. I wasn’t sure what the defining factor was for that. I got the impression that these characters lived multiple lives but as themselves, and they loved different people in those past lives. I had so many questions while reading this. Some of them were wonder, and some were confusion. As a result, my head spun in both good and bad ways.

One thing that I really had a tough time with was Stella’s character. She’s one of the POV characters, arguably the one with the most headspace time. I wanted to like her, but I found that it was very difficult to do so. In the beginning, we see her a few years ago. She’s younger and seems like a kind of shy but confident person. The Stella in the present, though, is hard and unforgiving. She’s calculating and even cruel in the way she treats Nyte. Perhaps there was more about this in the previous books, but as far as I could tell, Stella grew to hate Nyte because Nyte loved her and Stella didn’t want her to. Stella’s first love is her dance. She’s a Black Waltz (but there is also a song called Black Waltz?), and her dancing is magic. It’s her first love. Her second is herself (both her own self and the person that’s part of her but not part of her). Stella does some awful things in the name of love. It was nearly impossible for me to rationalize her behavior or forgive her for how she treated people, not just Nyte.

Truly, this book feels bigger than itself. There’s just so much. It is the kind of book I feel I could read over and over while learning new things about it every time. At the same time, I feel like reading it again would also introduce more questions without answers. If you like your romance to read a little like epic fantasy, this is the book to read. It is definitely only for adults. There are some intense sex scenes and a lot of erotic thoughts from the characters. There’s also adult language. If you don’t mind any of that, this is worth a read.

ABOUT YOSHIYUKI
Yoshiyuki Ly was born in San Diego, CA. Her pen name represents her multiracial heritage and a unique, diverse outlook that reflects in her work. She is a writer and a gamer, primarily inspired by thought-provoking, well-written video games such as the Shin Megami Tensei, NieR, and Drakengard franchises.

Yoshiyuki Ly will be awarding a $10 Amazon or Barnes and Noble GC to a randomly drawn winner via rafflecopter during the tour.