LABORS OF AN EPIC PUNK by Mark and Sheri Dursin

LABORS OF AN EPIC PUNK by Mark and Sheri Dursin 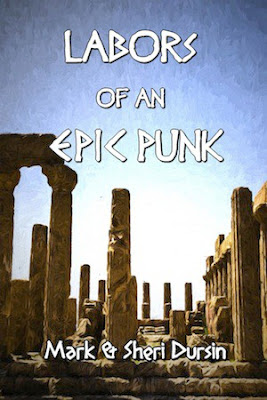 Mac is an epic punk. No wonder: after his dad went off to fight in the Trojan War and never came back, Mac spent his childhood evading his mom's scumbag suitors—all one-hundred-and-eight of them. Of course, he turned out this way—a moody, friendless sixteen-year-old who blows off work, alienates everyone at school, and pulls pranks. But when he trains a flock of birds to defecate on the headmaster, Mac (short for Telemachus) goes too far. The administrators give him an ultimatum: prove that he's truly the son of Odysseus by doing something heroic—or get out. A school story that just so happens to take place 3,000 years ago, Labors of an Epic Punk is a tale of friendship and transformation, regret and redemption, and a reminder to us all that even heroes need to survive adolescence.

EXCERPT
No one on the field that morning had any idea that all Hades was about to break loose.

Well, one person did.

The stands were over-crammed with students, all chirping away about their summer travels, each one trying to out-fabulous the other. But Mac wasn’t talking to any of them. (No surprise there.) Instead, he just stared at the empty stage in fist-clenching anticipation. For the entire morning, the entire summer, the entire two years he’d wasted at this gods-forsaken school, he’d been waiting for this moment. His moment of glory, of genius. The moment when he’d finally and irretrievably cross The Line— that hard-to-define boundary between tolerable and intolerable. Between a week of detention and expulsion. All he needed was for Headmaster Gurgus to blow on that shell.

Just when he thought he couldn’t wait any longer without throwing up, Mac heard the band play the opening notes to “Yielding Never,” Pieridian Academy’s absurdly overblown fight song. The Opening Ceremonies were officially underway. From his seat high up in the stands, Mac watched intently as the members of the so-called Grand Procession marched onto Garthymedes Field: the entire faculty and staff, wearing shiny red gowns and smiles full of phony reverence; followed by the honored students, also in ritualistic red, condescendingly waving at the crowd; followed by a grotesque, nine-headed Hydra.

Lastly, waddling ten paces behind the Hydra, in all his roly-poly, four-hundred pound glory, was Headmaster Gurgus.

~Buy LABORS OF AN EPIC PUNK on Amazon

REVIEW
Move over Percy Jackson and co. There’s a new Greek kid in town. Mac’s the name (short for Telemachus), and while he may not be the child of a god, he’s the son of a hero, which is just as tough.

When I switched my college freshman seminar from something vaguely societal-sounding and “easy” to Homer’s Epics, my counsellor looked at me like I was nuts. “Why?” she asked. My response: “Because I love Greek myth.”

In short, I also loved this book. Mac’s transformation is fantastic. His entire character makes sense, and his relationship with his mom is the most beautiful parent-child relationship I’ve read in a long time. As the book’s description says, this is a school story that just happened to take place 3000 years ago. It’s ancient but modern, serious but funny. It’s everything I remember about every “I’m not good enough” teenage feeling I ever had, times a thousand. Mac’s under the ultimate pressure. It’s bad enough living up to normal standards. He has to live up to a great war hero’s image. It’s huge, and yet, while it was times a thousand, it was all just so normal. I could relate to Mac’s situation as clearly as if it were happening today.

I love Mac’s friend’s, too. Homer (yes, that Homer) is the friend who wants Mac to succeed but also to live vicariously through Mac’s heroism. Outgoing Theo and caring drama student Calliope are twins but so distinct as characters. Their sibling relationship comes off so well, too. And Andie. Oh, Andie. She has a special place in my heart. She has just as many emotional struggles as Mac, and I loved how their situations kind of mirrored each other. I loved watching their relationship blossom and grow into something truly spectacular.

The narration flows great. The dialogue is fresh and snappy. There’s plenty of action that’s set off by slower scenes of Mac and his crew learning to be a group of friends. I saw myself in some of these characters and was able to identify with them easily.

To sum up, I could probably think of something to criticize, but I’d have to really sit here and think—maybe read the book again and search for missing commas or something. This is the high school story about Odysseus’s son I never knew I wanted. The end ties everything up, which makes me a bit sad. I want a sequel so badly.

AN INTERVIEW WITH MARK AND SHERI
-What inspired you to become a writer?

MARK: I have always loved stories, in large part because of my grandmother. She was a wonderful Irish lady with a great sense of humor and a keen eye for detail. I loved listening to her tell stories, even ones I had heard fifty times before. I liked to draw, too, and I remember being in third grade and writing and illustrating a little book about a gang of misfit heroes that I created.

SHERI: It probably seems cliché, but I would say a lifetime of reading has inspired my writing. From when I was a little girl, every time I would finish a book, I would make up stories in my head about what might happen next. Or I would create new adventures for the characters. It wasn’t a huge leap to creating my own stories...with the collaboration of Mark, my husband and brilliant writing partner.

SHERI: I think I would visit the Grape Vine, the campus restaurant and hangout. I love to eat out and there’s always something fun happening at the Grape Vine...a game of darts, a band playing, or a scheme being played out.

MARK:: I have always loved the beach, and the private school in our novel is situated on an island. So I guess I’d like to visit any one of those beaches. And I’d probably want to hang out with our character Theo, because he’s all about fun.

SHERI: Well...Mac has a BIG secret that he’s not ready to tell anyone yet. It explains a lot about why he’s such a punk, why he doesn’t believe in himself, and why he feels he’s failed his mother so completely.

MARK: Again, Mac’s roommate Theo...without question! (I mean, he’s a teenager in the book… but once he’s old enough, it would be great to hang out with him.)

SHERI Yes, me too! Theo is the life of the party wherever he goes.

MARK: I have never been in a fist fight in my life. So, I would diffuse the situation, ask him if he’d like to have a drink. If that didn’t work, I’d start quoting poetry-- maybe some from the Odyssey? I remember hearing the story of how Sting got the title of his 1987 album ...Nothing LIke the Sun; apparently, some drunk person was accosting him, so Sting just started quoting Shakespeare’s sonnet 130. The drunk backed off. The lesson, of course: if you encounter a drunk person, start quoting poetry, because then the drunk will think you’re crazier than he is.

SHERI: I would probably freeze for a second or two...and then run. Our characters might be up for the challenge, but clearly Mark and I would not!

SHERI: Erotica. I’ll leave that to the experts!

ABOUT MARK AND SHERI 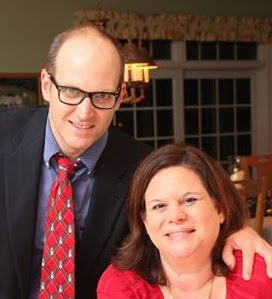 Mark and Sheri Dursin will be awarding a $25 Amazon or Barnes and Noble GC to a randomly drawn winner via rafflecopter during the tour.