KEEPERS OF THE STONE by Andrew Anzur Clement

KEEPERS OF THE STONE by Andrew Anzur Clement 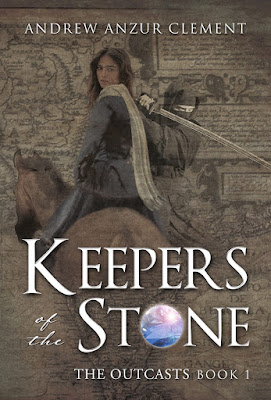 In a far corner of the British Empire, a mysterious girl gallops away on a horse, fleeing for her life. Malka has sacrificed everything to protect an all-powerful stone from falling into the hands of the malevolent Urumi. The last in a Sect of thieves, the girl is a trained killer. But will her lethal skills be enough to defeat the Shadow Warriors and their superhuman abilities?

The fate of the stone may depend on Stas, a courageous youth born into exile from a country that is not on any map. Nell, his friend since childhood, has been caught up in the Dark Order's evil designs. The young outcasts must confront demons, real and imagined, with the help of mystical new allies. Their journey will take them to distant lands and change their lives forever. 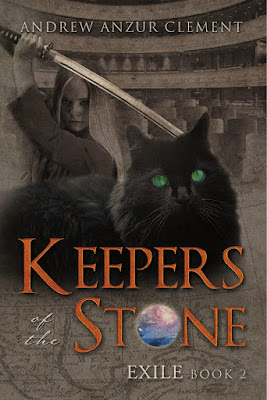 Stranded on the American frontier, Malka must stop at nothing to safeguard the all-powerful stone. She has come under the protection of a snarky felinoid – a shape-shifting girl who traces her lineage back to the court of Vlad Dracula. They must rescue with Henry, the American orphan whose thirst for knowledge could help decipher the clues to the next leg of their journey – if the Urumi don’t kill them first.

Alone in yet another strange land, Stas mourns the unthinkable loss of his friend, Nell. Cryptic messages offer new hope. But the Dark Order has devised another strategy to outwit the band of misfits. Plans are betrayed and alliances are formed as history points to the final objective of their quest. 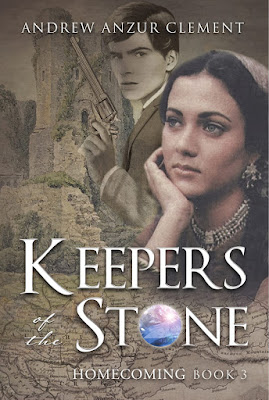 Stas and his companions have made their way to the partitioned homeland he has never visited. He dares to hope that Nell may be alive. The doomed princess Bozhena vows revenge on the Shadow Warriors, who have enlisted Malka’s most bitter enemy in their latest plot to control the powerful stone.

With the help of a streetwise gypsy girl, the unlikely travelers must outwit the Urumi and deliver the stone to its final destination. All they have to do is put aside the differences that threaten to tear them apart. The secrets of the past hold the key to the history of the future.

EXCERPT FROM THE OUTCASTS
"The firearms,” Malka whispered. “We still have them from the bank.”

“Do you even know how to fire a gun?”

The Thag shook her head.

The felinoid harrumphed. “Figures.” Then she began thinking out loud.

“So, we’re low on ammunition. Only six shots per gun, assuming they’re completely loaded. Okay. They’re in the open. We can use the wagon as cover. Target what shots we have. I’m not very good at aiming, but maybe if Mister Bunny Burglar over there takes….”

She stopped. Looking behind her, to the empty space off to the right side of the wagon’s seating area.

Malka and Liza looked around. Both of them spotted their erstwhile captive at the same moment.

“Ugh! He’s in front of the wagon running away with one of the cages,” Liza said, as if the situation needed any clarification. “I told you we should have killed that little….”

The gunfire ceased abruptly, replaced in short order with the quick screams of men and horses. Then silence. The escaping youth was forgotten for the moment. Liza quickly poked her head just over the stack of cages.

“Oh, no! Oh, please, no!” For the first time since Malka had known the felinoid, she seemed more genuinely worried than annoyed at their situation; she knew what Liza had seen.

“The Urumi,” she confirmed in a quiet voice. “All three of them. And they’re moving towards us.”

Malka untied the sash from around her waist and inserted the brass knob into one of its ends. She listened for one of the dark forms, as it approached her side of the wagon.

AN INTERVIEW WITH ANDREW
-What inspired you to become a writer?

I've enjoyed reading ever since I was a young kid. I was busy discovering books like Richard Adams' Watership Down,' James Michener's 'Poland' and -- my favorite -- Henryk Sienkiewicz's 'In Desert and Wilderness' when most others were playing video games. Despite this, I never considered writing fiction of my own.

That changed when I moved to Coventry, England for an academic mobility. This was my first time living in a somewhat small town. I didn't know anyone. There wasn't much to do there. I found myself sitting in an apartment and working all the time. To put it simply: It sucked. And I was going to have to survive an entire year there.

Having that much time alone, however, does give one time for reflection; inspiration strikes when you least expect it. One day, I found myself reflecting upon the characters from my favorite novel, while standing in front of the statue of a woman on a horse in Coventry's main square. In a flash of clarity, I saw the story that I knew I had to tell. Drafting commenced that night. My characters often speak to me while I'm writing; its kind of like the adult version of having imaginary friends. Once you take the cork off you can't stop; I'm currently writing Voyages of Fortune, the sequel trilogy to Keepers of the Stone.

I'd attend a gathering of the Invisible Circus. It's an other-dimensional realm, which exists out of our own space-time and can be accessed from various points around the world. The Circus can manifest in different forms -- anything from a South Asian jungle clearing, to an opulent western theater. It is controlled by the Urumi -- an ancient Order which basically consists of the Devil's indentured servants. They treat the Circus as a sort of forum for all those who practice mystical arts. The idea is that something might be revealed that will aid the Order (or, by necessity, others) in its designs. Often, the conjurings performed there lead to insights about the future or the past. I wonder what might be revealed there next....

Six years ago, I was studying in Budapest. My international trade professor recounted an experience in which she'd gotten a phone call begging her to come to one of her client's banks immediately. Upon arrival, she found that due to a mistake in the paperwork, a trade finance term which required goods be offloaded into the buyer's bank itself had been used. Consequentially, a truck driver from then-Yugoslavia had pulled up and dutifully offloaded an entire payload of live rabbits directly into the bank. The entire building was overrun with the animals!

In real life, the buyer was found and the rabbits eventually forwarded to his farm. But, in Keepers, my characters take this knowledge, a wagonload full of bunnies, and use it to their full advantage in the American West. Originally though, their actions were based on a real-life SNAFU that occurred in Cold War Hungary.

I'm going to have to go with Stas on this one. Above, I've alluded that Keepers of the Stone takes part of its backstory from 'In Desert and Wilderness,' a classical Polish novel written in 1910. You by no means need to have read it in order to understand or enjoy Keepers. But, Stas is one of the characters that carries over from the original work. In it, Stas -- a fourteen-year-old who's grown up in exile from his country -- accomplishes many great feats in the African wilderness. He never wavers from being forthright, courageous and exceedingly proud of his national heritage and who that makes him -- or, at least, who he thinks it does. We get a sense of all this in Keepers of the Stone as we encounter him two years later. Stas is going through harder times that have led him to begin questioning the veracity of his own belonging. Events thrust him onto an internal journey, in which he must confront and struggle to redefine his own personhood while enduring impossible loss.

As someone who has moved around so much since leaving his own country, there are times when I, too, feel as if I am from nowhere; I found that I came to identity with Stas's character in many ways, while writing. I think we'd have a lot to talk about if we sat down for a chat. Come to think of it, Stas actually does just this with a certain person in book three. It is my favorite chapter in the entire trilogy.

(Side note: I considered answering this question with Malka -- the main character in the 'A' story. But, then I remembered that inviting her out for drinks would be a very, very dangerous idea. Because, well, you'll see....)

Umm... Context, please? I mean, who is this dwarf, what did I (allegedly) do to him, and why is he so pissed about it? What kind of duel even is it? Am I likely to win? And, seeing as I can't help but notice that we've descended to the level of duel challenging here, how emboozened are we all, anyway?

I'm two things that may at first seem incongruous: self -professed anti-romantic, and a rabid opera fan. The outcome of this is that, while I foremost enjoy the music, I also come to the opera house to snark at the plots. Developments in them are often elaborated more from raw emotion, meant for dramatic effect, rather than for making 'plot sense' I am not a romance author; when I set out to write Keepers of the Stone, I wanted to tell a larger than life story. But, one that was not based only in romantic interest. In fact, with one notable exception, most of the characters' motivations take their rationales from social science and psychological theories such as the 'primary group'. Rather than romantic devotion, which I often find to be gag-inducing in most instances, and thus find exceedingly difficult to write.

At the same time, I'd never say never. In fact, there is a more romantic plotline in the sequel to Keepers, Voyages of Fortune. It's true that the scenes related to the characters more 'relationship oriented' feelings have been harder to draft. Yet, I actually think it works well; this romantic plotline serves to advance a larger story of deceit and intrigue that spans centuries. And the other characters are there all the way, to snark at or use the pitfalls, to which their contemporaries' romantic interests logically lead. 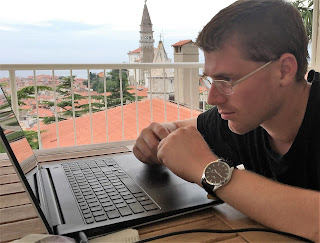 Andrew Anzur Clement departed his native Los Angeles at the age of nineteen, with a curiosity for far-off lands. He quickly discovered an insatiable wonderlust that has led him to live, work and study in many fascinating places around the globe. Now in his late-twenties the unabashed opera fan is based in Europe. He continues to travel and read widely, finding new inspiration in the places he discovers. In his ‘other’ life Andrew is an academic researcher, focusing on nationalism and identity formation. He enjoys including insights from his research in his books and the characters he inhabits.

Andrew Anzur Clement will be awarding a $10 Amazon or Barnes and Noble GC to a randomly drawn winner via rafflecopter during the tour.