JANE AUSTEN LIED TO ME by Jeanette Watts

JANE AUSTEN LIED TO ME by Jeanette Watts 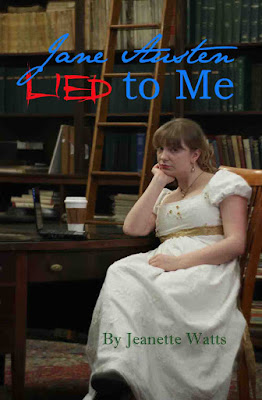 What college girl doesn’t dream of meeting Mr. Darcy? Lizzie was certainly no exception. But when Darcy Fitzwilliam comes into her life, he turns out to be every bit as aggravating as Elizabeth Bennett’s Fitzwilliam Darcy. So what’s a modern girl to do?

Jeanette Watts’ satire pokes loving fun at Jane and all of us who worship the characters who shall forever be our romantic ideals.

EXCERPT
Well! That was interesting. My roommate invited me along to this frat party she was going to. She went through something called rush week, and she is now pledged to a sorority. She said the frats are less formal than the sororities, and even though I wasn’t a pledge I could go with her. I figured, why not, it should be fun, right?

I got to meet the guy she’s chasing. I couldn’t blame her for being interested. He’s cute, and sweet, and considerate, and a total people-pleaser. One of his parents must be the demanding sort who is never happy.

He introduced us to his friend… whose name is Darcy Fitzwilliam! I wasn’t sure at first that the guy wasn’t just pulling our legs.

“Obviously,” he answered. Not much to go by.

“I love Pride and Prejudice,” I continued.

“I hate Pride and Prejudice.” I can only describe the look he was giving me as hostile.

“I think you will find yourself very much in a minority,” I answered, returning his look with one of my own.

We didn’t talk any more that night. Talk about getting off on the wrong foot!

AN INTERVIEW WITH Jeanette
-What inspired you to become a writer?

I love words, and I love writing! It has always amazed me that the majority of people out there don't enjoy writing. It's such a wonderful feeling when the stories and characters inside my head are out there on the written page, instead of banging at the inside of my brain, demanding to be let out. It's a joyful thing giving birth to characters who are fully actualized people, who surprise you by thinking and saying and doing things that you hadn't planned.

Wow, I wish this interview was about my historic fiction, I would totally go to visit Worth's dress shop in Paris! This book is a modern story set on a college campus. It is a compliation of several colleges in my life; I've described the "sweet spot" in the library on the campus where I've been teaching for the last 16 years, my dorm when I was a Freshman, the center of campus at a school where I go to workshops every summer. If by going to this college world for a day I'm going back to being a college kid, I might change my major - or at least sign up for more internships. If I'm just setting foot in my all-American college exactly as it appears on paper, I will go hang out in the sweet spot in the library. And hang out in the Student Union. The Student Union is always one of the best places to hang out on a college campus.

That books set in modern times take every bit as much research as historic fiction! Instead of researching dates for Presidential assassinations and glass manufacturing techniques and the dates that Gilbert and Sullivan shows came out, I was constantly calling upon my dance students to ask questions about student life in 2017. When you take notes in a chemistry clssroom, are you doing it on a laptop? Or do college kids these days still use paper and writing utensils? I teach a dance class. My students get no desks, and there's no taking notes of any kind.

My heroine's boss at the Law Library. She's a very small part, but in my head, she's been out of college as long as I have, and she's got a couple decades worth of stories about the crazy things she's seen in libraries. I worked at the library when I was in graduate school, and I certainly had my share of interesting encounters.

When I stop laughing, I ask which one of us gets to choose the weapons. If I get my choice of weapon, I have to decide whether I want to be mean, and choose fencing foils (I'm a fencer). Or else I challenge the dwarf to a contest to see which of us has the stranger items in our purses. If my challenger is purseless, I offer a contest of wits - that way I have a 50-50 chance of losing. If the dwarf isn't laughing by now, I might have to tactfully withdraw to a different tavern. After all, it doesn't sound like good policy to go around provoking dwarves to duels.

Horror. I don't understand the existence of the horror genre. Life is plenty horrifying as it is - you want horror? Just turn on the news. There is something horrifying going on somewhere in the world. Exposing people to violence on paper, traumatizing them through a movie or TV screen, always makes me wonder how we are serving our society by doing that. People come out of the military carrying memories of horrific experiences they are trying to forget. Women's shelters are full of horror stories. Real ones. But there's a genre out there creating artificial horrors? Why on earth would we do that? 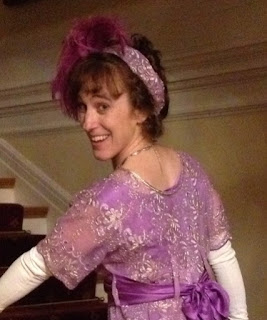 Jeanette Watts had been writing historic fiction when the inspiration for Jane Austen Lied to Me hit her on the drive home from the Jane Austen Festival. The idea was simply irresistible, and she put aside other writing projects in order to focus on writing a satire, thinking it would be a "mental vacation." It turned out to take every bit as much research to write a modern story as it does to write a historical one.

She has written television commercials, marketing newspapers, stage melodramas, four screenplays, three novels, and a textbook on waltzing. When she isn’t writing, she teaches social ballroom dances, refinishes various parts of her house, and sews historical costumes and dance costumes for her Cancan troupe. 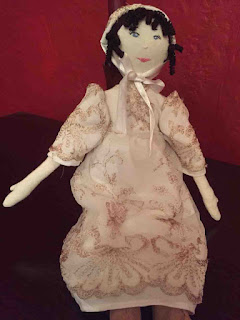 Jeanette Watts will be awarding a doll dressed in Regency clothing, handcrafted by the author (International Giveaway) to a randomly drawn winner via rafflecopter during the tour.