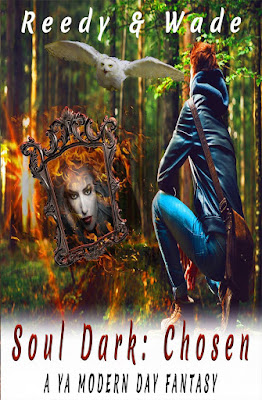 War is coming between Lukas’ Goddess and an ancient Demon Lord. But the death of his parents shakes his faith, and with the loss of his remaining family it is shattered. Blinded by rage, Lukas turns away from his friends and trains under a deceptive, yet formidable master to hone his magic and prevent the demon’s final objective--obliteration of all life on earth.

War begins! A forged weapon, Lukas rejoins his friends and sets after the Demon King. From a hidden crypt, where evil lies waiting, to the Iowa countryside, they battle to prevent the end of all they know. Lukas must overcome his doubts and allow the Light to work through him--to defeat both the foe of his Goddess and a new more familiar one.

Soul Dark: Chosen is a coming of age tale in the modern-day world when a war between ancient deities and demons culminates in a winner-takes-all battle that could determine the fate of all mankind.

EXCERPT
Helen shook her head and wiped away perspiration from above her glasses; she was most uncomfortable so near the altar. “The last guardians of their tribe formed a peace with the ancestors of our Druid clan and together they tried to destroy it,” she continued, as if she hurried to share her tale before changing her mind. “When that failed, the wisest and most powerful of our two tribes dream quested within, to the other side. They were like you, Lukas—they were bruadaraiche—those who dream.”

Lukas regarded the altar one last time, lost in thought, redoubling the mental shields between himself and the near-physical malice that exuded from the ancient religious relic. He had never felt, nor even suspected anything so evil could exist—let alone, hidden in a quiet corner of his family’s farm. Why here? Why us? He wondered. What was so special about the trees in our grove? Or was it all just by chance? The way his parents and grandparents had raised him left no room for belief in the coincidence, which left him with one final thought. What force could affect the matriarch of his family so—a woman who for as long as he could remember met every problem head on—what could leave one such as her trembling and quaking in fear?

“The greatest powers of their day and not a one survived that perilous journey,” Helen whispered, revealing an amulet she wore, covered with the same imagery and artistry as your family’s forearm tattoos. “And as darkness fell over the prairie one last time, this—all of it—became our secret to guard until the end of days or until we are no longer capable.”

Lukas regarded the glowing tattoo on his own forearm, the shimmering amulet his grandmother wielded, and the archaic, shadow painted altar. Two poured warmth, however feeble, into the bin and the last, it drank it away. He heard a buzzing sound, not in his ears, but rather in his thoughts; his life had gone without warning from melancholic to deadly. “But how can we know when—”

“There are no certainties, Lukas, there never are,” Helen interrupted brusquely, “but now understanding that such a darkness exists, it knows of you, and now you must learn to defend yourself… And those closest to you from its many forms.” She offered him her arm, signaling it was time to move on—to step away from the overbearing gloom.

Lukas hooked his arm with hers and led her back outside into the frigid night that seemed somehow much warmer than the area within the bin. He slammed the door behind them with a thought and bid the chains and locks to rattle back into place and in almost an afterthought, he extinguished the sconces. He chose not to mention that during their visit it seemed as if the shadows had moved, almost in time to his thoughts, or his thoughts in time with them. No sense in having her doubt his sanity, or at least not as much as he already did.

In their absence and the sudden blackness, a red-hot glow radiated from the altar and the echo of a growl spun throughout the bin. The first visible twisted hint of life from within the altar, and in their hurry to distance themselves from its alien, cold touch, they both missed it. I saw it, as did the Other, and it was at night, when he was strongest. I cried and screamed, but he only laughed, and that frightened me more than whatever mystery dwelt within the altar.

ABOUT THE AUTHORS
E. L. Reedy was born and raised in Iowa, where he devoured tomes of fantasy, sci-fi, and young adult novels as a child. In his free time, he is an avid gamer (D&D and Pathfinder). He has traveled the world as a soldier in the U.S. Army, and now lives in Iowa, where with his writing partner, he continues to pen works in the realms of Fantasy and Horror in the Young Adult Universe.

A. M. Wade was born the only girl in a family with five boys, she readily escaped into fantasy, sci-fi, and other fiction novels. Having traveled through most of the US, she enjoys using scenery and characteristics of the different states in the story adventures she created for the little ones in her family. Now, she writes sci-fi, fantasy and horror with a lifelong co-conspirator.

Together: Having lost many friends, associates, and even children from our home town over the years to suicide, they wrote their first novel, Upon Broken Wings. Told from the point-of-view of a young witness, the story teaches that suicide is not an end to suffering, but rather the beginning of unimaginable pain for those left behind and that there is always hope if we choose the path of life.

The authors will be awarding a $25 Amazon or B/N GC to a randomly drawn winner via rafflecopter during the tour.