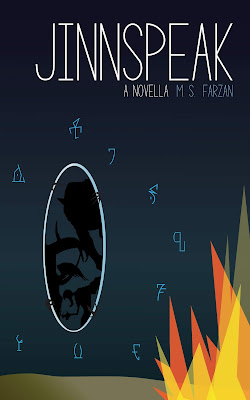 Zahra's algebra midterm is in one month, but more importantly, the Winter Formal is only two weeks away. Fitting into high school is hard enough for the Pakistani American teenager, particularly when a fire spirit begins appearing in her dreams, speaking to her in a language she doesn’t understand. Meanwhile, a secret cult at her school begins to carry out a nefarious plot, with only the Magic Club – and its newest member, Zahra – standing in its way. A popular multiplayer online roleplaying game may hold the secret to saving Golden Mountain High School, but only if Zahra can decipher her perplexing new talent – Jinnspeak.

It wasn’t one of those trances where people and places seem to be just strange enough to have the possibility of being real. Nor was it a fragmented dreamscape where each object and every character stands as a symbol for thoughts being played out in the subconscious. It was vivid, cohesive, and unlike anything she had experienced.

She was standing in a large grass field, lit only by a full, red moon overhead and frigid as a midwinter night. She shivered, but not with cold, as her body was hot, as though she had been running. Her breath turned to frost in front of her, and the only sound was the air rushing in and out of her lungs.

Zahra turned to take in her surroundings, but there was only dimly lit grass for as far as her eyes could see. She looked up at the moon, which cast the field in an eerie scarlet incandescence. Her heart beat loudly in her chest, sounding like a drum in her ears.

She turned again, and was startled to see a figure standing before her, in what had previously been an empty expanse of grass. The form was a rough outline of a human body, mirroring her own in size and stature, but wreathed completely in crimson fire. It made no motion or sound, and two almond-shaped eyes peered out at her from within the flames.

REVIEW
My first thought upon finishing this book was “I wish this was longer.” I really enjoyed this, but it felt a bit rushed and underdeveloped. There was a lot of good stuff going on in here—diversity, teen issues, unclear dreams, the role of the online game—but none of it felt as fleshed out as it could have.

Zahra is a protagonist to cheer for as she comes into her own. Again, though, this felt rushed. At the beginning of the book, she has one real friend and feels like she doesn’t fit in. Then, she goes to one meeting of the Magic Club, and suddenly, she has this new group of friends to trust. I wanted more of her personality change to be shown. It also took me a bit to realize Zahra practiced Islam. At the beginning, she wears a scarf over her head, and there are allusions to beliefs and practices of the Muslim religion. But it wasn’t until a few chapters in that this became clear, and the guessing took me out of the story.

All in all, I really don’t have too much to say. I liked this, but it felt too fast for me to love it. Really, it’s a shame. With more details and twists in the story, this has all the makings of something truly spectacular. For me, it fell short of the mark, but I would read more from this author. The elements this book brings together are so interesting. I’d like to see what else this author comes up with. 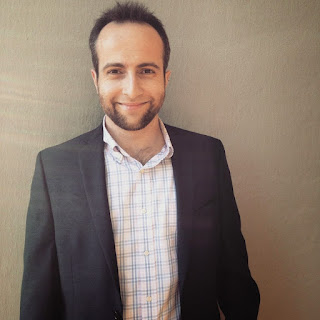 M. S. Farzan was born in London, UK and grew up in the San Francisco Bay Area. He has a B.A. in Integrative Biology, M.A. in Religious Leadership for Social Change, and Ph.D. in Cultural and Historical Studies of Religions. He has written and worked for high-profile video game companies and editorial websites such as Electronic Arts, Perfect World Entertainment, and MMORPG.com, and has trained in and taught Japanese martial arts for over ten years. He also enjoys soccer, baseball, and games of all kinds.

M. S. Farzan will be awarding a $20 Amazon/BN GC to a randomly drawn winner via rafflecopter during the tour.