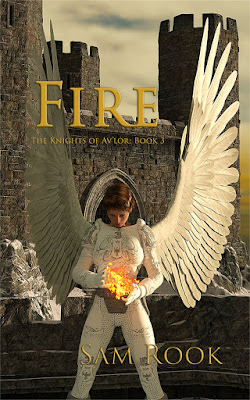 The thrilling conclusion to the Knights of Av’lor trilogy!

Trapped on Av’lor and left for dead by her betrayer, Kathryn’s unrelenting determination is the only thing that might overcome the invading Zahkrinon army.

With the portal destroyed and the Zahkrinon army fast approaching, Kathryn and Lanclor have no choice but to focus on the survival of the Knighthood before they can consider rescuing Rachel. Unexpected events threaten their victory and the combined Av’lorian and Earth forces struggle to survive as their numbers dwindle.

They find the Zahkrinon are more dangerous than they had ever imagined.

EXCERPT
“I know this news is hard to hear, but I wanted you to hear it from me,” Alextor continued. “I will do everything in my power to find a way back for you to return to your homeworld. However, the most pressing matter at hand is the approaching army. We must focus on the approaching hoard of Zahkrinon and dark elves before we can delve into—”

Kathryn abruptly rose from her chair and left the room. Most of the servants scrambled out of her way and faded back into the background, except for one small form who followed Kathryn from the room. Hal shook his head. The servant probably thought she could help the Hero of the Last Battle in some way. Hal turned his attention back to Lord Alextor, determined to listen to what his commanding officer had to say.

“I know not all of you will agree, but I believe—”

Nidira threw herself at her brother’s side and intercepted the knife meant for Lord Alextor’s heart. All around the table, the bare-footed servants randomly attacked the members of the meeting. Blood splashed across the table, a startling contrast against the white slices of bread. Hal jumped to his feet and looked behind him just as a servant prepared to attack.

-Amazon
-Kobo
-B&N
-Smashwords ~Follow the rest of the tour

ABOUT SAM
Sam Rook lives in Vermont with her husband and two children. Her passion for fantasy novels began in high school with her desire to write following shortly thereafter. Software engineer by day, fantasy author by night, she strives to give her readers a chance to enjoy worlds that transport them away from the stress of everyday life.

Sam will be awarding a $20 Amazon or B/N GC to a randomly drawn winner via rafflecopter during the tour.