THE EYE OF RA by Ben Gartner

THE EYE OF RA by Ben Gartner 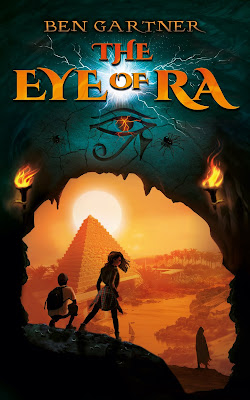 Exploring a mysterious cave in the mountains behind their house, John and his sister Sarah are shocked to discover they’ve time traveled to ancient Egypt!

Now they must work together to find a way back home from an ancient civilization of golden desert sand and a towering new pyramid, without parents to save them. The adventures abound—cobras, scorpions, a tomb robber, and more! The two kids have to trust each other, make friends who can help, and survive the challenges thrown at them . . . or be stuck in ancient Egypt forever.

For readers graduating from the Magic Treehouse series and ready for intense action, dive into this middle grade novel rich with meticulous historical detail.

EXCERPT
Up ahead, almost like an optical illusion in the rocks, a black oval dissolved into the mountain. It seemed to shimmer in the fading sunlight.

Sarah moved forward. “It—” She stepped closer, hunching to get a better look at the dark shape about the dimensions of the full-length mirror they had on the back of their bathroom door. “It looks like a cave. Cool!”

“Careful, Sarah. We shouldn’t go in there.”

“No, wait, I said we shouldn’t go in there.” John turned to walk away. But he couldn’t leave his sister. “We should get Mom and Dad.”

“I’ll just peek in,” Sarah said, standing only an arm’s length from the entrance. “It definitely looks like a cave, or maybe an old mining tunnel or something. I don’t remember this from before.”

Sarah stepped closer, slowly, her lips parted and her eyes fixed on the cave. Without another word, Sarah stepped across the threshold, and her body disappeared into the black.

REVIEW
Middle-grade fantasy, especially involving superheroes, fairy tales, or mythology, is very much my jam, so when I saw this title, I knew it was going on my to-read list. Though Egypt is one of the mythologies I’ve seen written about most often, the variation never fails to amaze me. Gartner’s take is no exception, and I was drawn in to this world and its conflicts.

I’ve never been to ancient Egypt. I suspect the author hasn’t either, but I felt like I was there. The heat and dryness were very well described. There is a sandstorm at one point, and if it was described at all how being in a real sandstorm feels like, I’ll pass on the real-life experience. It’s bad enough on a windy day at the beach. This sounded a thousand times worse.

The characters were fun, and I enjoyed all of them. John and Sarah made for great time travelers. I enjoyed their very different reactions to suddenly being in ancient Egypt. I did feel a disconnect between Sarah in the first chapter and Sarah through the rest of the book. Her love of all things history and adventure didn’t quite match up with my initial impression of her. I think a bit more to show her personality before the siblings went back in time would have cleared this up.

The new friends John and Sarah make in Egypt were equally fun. I liked how the moving-to-a-new-place conflict for John was mirrored in Egypt. I won’t spoil, but there were lots of other little things that really brought this story out as a great read for kids especially. Lessons are learned. Growing up is done. The end wasn’t what I expected, but it made perfect sense. I’m unsure if there’s a sequel coming, but if there is, I’ll be reading it.

AN INTERVIEW WITH BEN
-What inspired you to become a writer?

Other writers. Reading books. Subconsciously, I thought, “Wow, writers can transport me into other worlds and excite me and scare me and tweak my emotions – I wanna do that!” So, you know, the typical author response: a lust for power.

Listen. We know a fair bit about ancient Egypt from the archaeological record, but, like all written history, what was etched in stone is likely what was controlled and permitted to be documented. I would ask questions of everyone I met, especially the “ordinary” people, and just listen to their stories. Hearing the idiosyncrasies of their lives, their beliefs, and their traditions would be fascinating – and likely prove that we’re more alike than different when it comes to everyday stuff.

Well, both of my protagonists (John and Sarah) should be asleep at two in the morning, but if they were awake, I suppose they would have reasons. In the beginning of THE EYE OF RA, John might have awoken from a bad dream, some vague premonition filled with anxiety. And Sarah might have snapped out of bed at two in the morning ready for the day already. I don’t know where she gets her energy.

I’d love to get a green tea with Imhotep. He served as vizier to King Djoser and architected the world’s first pyramid (a stepped design) in Saqqara, Egypt. This pyramid plays a role in THE EYE OF RA. We’ve romanticized the person, but I’d like to get to know the real man.

I would be very confused as to why a dwarf (or anyone) would want to challenge me to a duel! I would ask about their feelings (ha!) and if the situation couldn’t be cooled, then perhaps something like an arm wrestling championship or ice cream eating contest would be a better challenge.

Romance. I don’t mind the occasional rom-com that’s realistic, but the romance novels with the girl on the cover with the torn dress and the man with his six-pack showing make me roll my eyes. I mean, to each their own: Romance writers might say the same thing about Science Fiction or Fantasy novels! In the end, I suppose most fiction writing is about escaping into your mind, so while I can respect that aspect of those novels, that type of writing isn’t what excites me. And I have to be excited to write because I’m in it for the FUN!

ABOUT BEN
Ben Gartner is the author of adventure books for middle graders and thrillers for adults. His writing for both audiences shares an ability to grab readers by their neurons for a thrilling ride, maybe even teaching them something in the meantime. Ben can be found living and writing near the mountains with his wife and two boys.

Ben Gartner will be awarding a $30 Amazon or Barnes and Noble GC to a randomly drawn winner via rafflecopter during the tour.