SIGN OF THE GREEN DRAGON by C. Lee McKenzie

SIGN OF THE GREEN DRAGON by C. Lee McKenzie 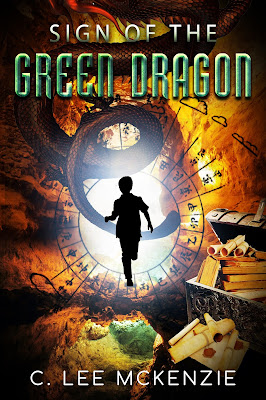 When a wall of their cave hideout crumbles, three boys discover a skeleton, clutching a treasure map. They set off to trace the story of an old murder, but stumble into a modern crime, and confront ancient Chinese dragons.

EXCERPT
The earth quivered. Then, like a lightning bolt, a crack shot up through the ground. Rocks and dirt crashed down, pelting their heads and shoulders. Sam grabbed Joey’s arm and Roger’s shirt and scrambled from inside the cave, pushing them ahead.

Outside, they landed in a heap. When the earth settled into place, they rolled onto their backs, sucking air and panting.

“Okay, that’s it,” Roger said. “This is one mean mountain. And it’s trying to squash all of us. I’m going home.”

“You get no argument here,” Sam said. “I’ll get our gear.” He edged toward the cave and grabbed Joey’s backpack. Roger’s backpack straps stuck up from the pile of rocks, but Sam couldn’t find his at all. He switched on Joey’s flashlight and aimed the beam at the heap of rocks and dirt.

Inside, where a solid wall once stood, was a hole, and behind that hole was another cave. “What the ... ?” He blinked, and then looked again. “Hey! You guys got to see this!”

“No way am I going near that cave,” Roger said, and he backed away.

Sam poked his head inside to get a better look. He swung his leg over a boulder. “Wait here, then,” he said, glancing back.

Joey jumped up. “Don’t even think you’re going in there without me. I’m coming. And so’s Roger.”

“I don’t—” Roger didn’t have a chance to dodge away from Joey’s grasp.

“Move it.” Joey pushed Roger ahead of him. Roger was bigger in all directions, but Joey had the attitude that let him get his way. It also landed him in major trouble almost all the time. 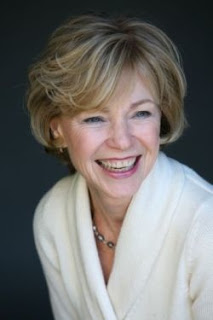 C. Lee McKenzie has a background in Linguistics and Inter-Cultural Communication. Her greatest passion is writing for young readers. Sign of the Green Dragon is her third Middle Grade novel. Alligators Overhead and the sequel, The Great Time Lock Disaster were her first two. She has traditionally published four young adult novels: Sliding on the Edge, The Princess of Las Pulgas, Double Negative and Sudden Secrets.

AUTHOR’S NOTE:
I'd like to highlight the fact that I always have a free ebook (a different one every few months) available on my website for visitors.

C. Lee McKenzie will be awarding a $15 Amazon/BN GC to a randomly drawn winner via rafflecopter during the tour.