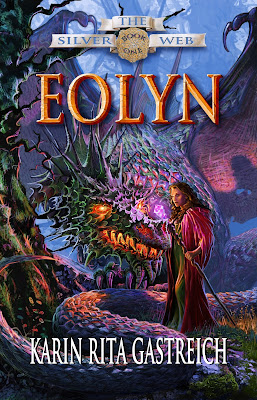 In a land ravaged by civil war, the Mage King Kedehen initiates a ruthless purge of the magas. Eolyn, last daughter of the magas and sole heiress to their forbidden craft, seeks refuge in the South Woods.

When she meets the mysterious Akmael, heir to the throne of this violent realm, she embarks on a path of hope, seduction, betrayal, and war. Desire draws Eolyn toward Akmael’s dark embrace, but fate binds her to Corey of East Selen, a cunning mage whose ambition challenges the limits of love and loyalty.

Can she trust either man?

Hunted in a realm of powerful wizards and brutal deceptions, Eolyn must find her own path to freedom or she will burn on the pyre.

A Nest of Vipers

Mage Corey closed the distance between them. His magic spread in a hush through fallen leaves, surrounding Eolyn, cutting off all retreat, and daring her to defend herself with a counter spell. He stopped just in front of her, his face a breath away.

“Sometimes I like to imagine you and I live in a world where we do not feel compelled to keep secrets from each other,” he murmured.

“Indulge me in this fantasy and tell me: Why do you desire to go to the King’s City?”

Eolyn willed her eyes to remain steady on his. “It is a child’s wish. I had a friend growing up. I believe he lives there. I wish to find him. That is all.”

Mage Corey studied her a moment. Then he stepped away and continued his walk. The autumn earth released Eolyn’s feet. She quickened her pace to catch up with him.

“A friend,” Corey asked, his voice a mask of idle curiosity, “or a lover?”

“A friend. We were only children when we knew each other.”

“I see. I am sorry, Eolyn, but I cannot take you to the city, not because I object to you finding your friend, but because I am averse to leading fawns into nests of vipers. Still…” Corey stopped, his expression thoughtful. “I know many people in the city. If you give me the name of this friend of yours, perhaps I could...”

Eolyn’s expression put a stop to his words.

“I see I am pressing too hard. Very well, Eolyn. We have had a fair exchange: one truth for one truth.” Touching Eolyn’s chin, Corey brought her gaze back to his. “Perhaps we can continue down this path when I return.”

~Buy EOLYN on Amazon. The book is free during the tour.

AN INTERVIEW WITH KARIN
-What inspired you to become a writer?

I write to keep sane. Seriously. If I go for too long without writing, I start to get restless and irritable. The same way coffee drinkers get when they go too long without coffee. So more than inspired, I guess I’m kind of addicted. Ever since I can remember, I’ve been writing stories, even though I only started publishing recently. And sometimes I resent publishing because it takes time away from real writing.

I’d go to the South Woods, the vast expanse of forest that was Eolyn’s home and refuge during her childhood. I’d love to hike and camp there. Maybe I’d see some of Eolyn’s friends, like Lynx and Wolf. With a little luck, perhaps I’d meet the Guendes and discover Ghemena’s hidden cottage.

A lot of pre-research went into writing Eolyn. What I mean is, rather than starting Eolyn and then doing the research, I read many things about medieval times, medieval women, witchcraft, and shamanistic approaches to magic long before Eolyn became a cohesive idea in my head. Eventually, ideas inspired by these readings coalesced around the story of a solitary witch in world hostile to women practitioners.

One fun and interesting fact I’ve learned about medieval women along the way is that many of them wielded great power without ever picking up a sword or charging into battle. This idea fascinates me and has shaped many of the women characters in my novels, including Eolyn, who seek to defend their way of life without becoming warriors.

Oh, all of them. Except maybe Tzeremond, who leads the purges against women practitioners. I’d also avoid Tzeremond’s prodigy, the Mage King Kedehen. Not because I wouldn’t be curious to speak with them, but because they’d probably throw me on the pyre before the night was finished.

I’d love to spend an evening with Corey’s Circle, the troupe of travelling musicians and performers that Eolyn joins soon after she returns from exile. The Circle throws some great parties. I’d probably spend most of my evening dancing, drinking, and chatting with Mage Corey. What can I say? I’ve got the biggest crush on him, even though his loyalties are constantly in question. Is he a spy of Tzeremond, or an ally of the persecuted magas? Only time will tell…

What do you enjoy reading in your free time?

Everything. I’m particularly fond of history and historical fiction. I also enjoy fantasy and science fiction. But really, almost any book with great characters and an intriguing story appeals to me, regardless of the genre.

I think I’d have a hard time with any genre that demands graphic violence. There are elements of horror in my own stories, and there’s also violence, because that’s the nature of medieval society. But I’m not a fan of gratuitous violence. I don’t like to watch it, read about it, or write it.

The second book in The Silver Web, entitled The Sword of Shadows, is much darker than Eolyn. There is more violence and some truly malevolent characters. I don’t consider any of this gratuitous; The Sword of Shadows is immersed in war, and war is drenched in violence. I had to be honest about that in my writing. So there was no getting around some of the scenes, but still. They were hard to write.

While I include elements of horror in my stories, to write something that is graphically violent from beginning to end would be too much for my sensibilities. Make love, not war. That’s what I always like to say. 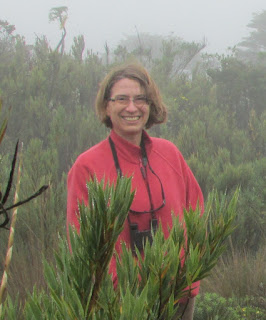 Karin Rita Gastreich writes stories of ordinary women and the extraordinary paths they choose. She lives in Kansas City, Missouri, where she is part of the biology faculty at Avila University. An ecologist by vocation, Karin has wandered forests and wildlands for over twenty years. Her past times include camping, hiking, music, and flamenco dance. In addition to The Silver Web trilogy, Karin has published short stories in World Jumping, Zahir, Adventures for the Average Woman, and 69 Flavors of Paranoia. She is a recipient of the Spring 2011 Andrews Forest Writer’s Residency.

Karin will be awarding a $15 Amazon or B/N GC to a randomly drawn winner via rafflecopter during the tour.