MIND OF THE BEAST by Brian and Juliet Freyermuth

MIND OF THE BEAST (A Sundancer Novel, #2)by Brian and Juliet Freyermuth 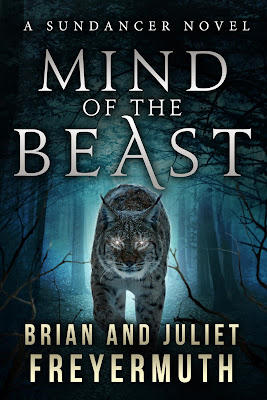 When a vampire asks Nick St. James to investigate his friend’s murder, the answer should have been easy, right? NO. Okay, not so easy. How do you say no to a friend like Felix?

Besides, with Thelma by his side, what could go wrong? She’s got that, umm … cute pink backpack of Voodoo magic. Of course it hurts that she manages to look good even when she accidentally conjures and gets possessed by a drunk loa. No, it won’t be at all distracting to have her along.

Since no good deed goes unpunished, a crazy man with starry eyes jumps out of the shadows at the victim’s apartment and pummels them. Their attacker doesn’t just beat them up but also infects them with some bad mojo that’s killing Thelma and making Nick angry … angrier.

If the trail to the suspect—the Green Man—is any indication, they’ll be killed before the poison finishes the job. The old gods are more dangerous than helpful. The Watchers—even the one who seems to have a brain—are always a hazard. And what’s with the all the minions? Who has minions anymore? Not to mention the rapid progression of the infection that quickly upgrades Nick’s condition to ‘blind-rage-filled.’

Why couldn’t Felix have just asked Nick to help him move?

EXCERPT
“How about a beer?” Felix asked.

“Beer? I didn’t know you could drink that.” A beer actually does sound good, I thought as I put away the coffee beans and grabbed a couple bottles from the fridge.

“We can drink or eat anything as long as it doesn’t have garlic in it,” Felix said as I handed him a bottle. “That shit burns, man. I once saw a couple of vamps have a garlic eating contest.”

He shrugged. “They were bored.”

“Who won?” I asked as I sat down in my old black recliner.

“Their heads caught on fire.”

“Seriously, it was like chomp-chomp-poof.” A ghost of a smile played across his lips. “Our bodies burn out most food. High metabolism or something. Does nothing for the hunger, though. I know a few that don’t eat at all,” he said before chugging the amber liquid.

“Did you know,” he continued, “there’s a dude who actually wrote a book called The Anatomy of a Vampire? He wrote it like fiction so the Watchers wouldn’t get him, but I’ve had a couple of my peeps on the slab over the years. He was right on the money. Talked about how our cells don’t work with food anymore, man. Just blood. How we can eat and eat and eat, but the blood just sends the food packing. Talk about having something go right through you.” He chuckled, although the humor didn’t reach his eyes. “Another reason most vamps don’t eat or drink.”

~Buy MIND OF THE BEAST at Amazon.

AN INTERVIEW WITH JULIET AND BRIAN
-What made you want to write?

Juliet: I want to empower people and entertain them in the process. In Demon Dance we watch Nick struggle with losing his wife. In Mind of the Beast we watch him overcome something from his childhood. We have a science fiction short story on our website called “Sliding Down” that’s all about taking the time to realize what’s important in your life. If one person is inspired to better their situation, I’ve done my job.

Brian: Writing is in my blood. I began in fifth grade with a fantasy story about taking a walk in the clouds, and never stopped. Reading took me to places I could never imagine, and I realized early on that I wanted to take others to the worlds in my own mind. To bring them along as we travel to a magical realm, or travel to the stars.

-What draws you to urban fantasy?

Juliet: It’s fun taking a city like Seattle and creating a magical underworld within it, where vampires, deities and other supernatural creatures cope with today’s times. One of my favorite side characters is Felix. Poor vampire was turned in the 60’s and hasn’t really escaped that era. But, he doesn’t give up connecting to humanity. Lately he’s been playing role-games like Fading Suns and D&D. Could you imagine what would happen if one of the players found out what he was?

Felix won’t be in Book 3 but I’m thinking about writing a spinoff for him. In Book 3, we’re taking the gang to Las Vegas. I spent my early childhood years there back when the mafia was running the casinos. Nick and Thelma go there to find their friend Jesse and stumble upon a vampiric plot that could alter the course of history. Not all vampires can be trusted.

Brian: I’ve always loved the thought that our mundane world could hold a dark, shadowy world beneath it. Some of my favorite books are Sandman by Neil Gaiman and The Great and Secret Show by Clive Barker, all which deal with this darker, magical world underneath our own.

Brian: I went through two story revisions on Mind of the Beast and still couldn’t find the heart of it. I tried this myth and that one, but nothing gelled. It was only when I stumbled across a series of strange carvings across Europe that it clicked. No one knows when the carvings began, or who started them, but only that they were known as the Green Man. And thus the story was born.

Juliet: Brian does the bulk of the research of mythology and then we have long talks about it on our nature walks. I knew absolutely nothing about Voodoo and still have so much to learn. At some point I’d love to talk with someone about it. The Loa, Oussou, loves his rum and is very rowdy. Nick learned the hard way not to come between him and his rum in Mind of the Beast.

Juliet: Well definitely not Oussou. I’m not a big drinker anyways and he’s violent when he’s tipsy, creating Molotov cocktails out of just about anything. Why he ignited a teddy bear escapes me. Felix is a bit of a druggie. He likes his blood laced with all sorts of stuff. If he could give it up for a day, I think it would be fun playing a role playing game with him. Playing Vampire the Masquerade with him would be fun on so many levels. Especially if I was the only one who knew what he was.

Brian: One of the best things about Demon Dance was taking something as iconic as the Fremont Troll in Seattle, and bringing it to life. I’d have to bring the drinks to him, but he’d be a blast to get drunk. I could see him regaling me with stories of the good old days.

Juliet: Don’t worry about the first draft being bad. It will be. Think of it as modeling clay. Your first draft creates the form. It’s only after you sculpt it with rewrites that it will be your masterpiece.

Brian: Always listen to your characters. There will be times when you want the story to go one way, and they’ll decide against it. Listen to them. Most of my writer’s blocks come when I try to force a character to do something he or she doesn’t want to do.

Juliet: It’s more a type of character I can’t write. I could never write a main character without hope. Hope seems almost ridiculed in today’s entertainment and I don’t want to add to that. Attitude towards a situation makes all the difference in the world. It’s amazing what can be done if you simply believe it’s possible.

Brian: I don’t know if there is a genre I could never write. Between my games and my novels, I’ve written horror, fantasy, science fiction, urban fantasy, post-apocalyptic, and even for kids! I think it’s great to try different things and learn a new genre. It helps me expand as a writer and opens new perspectives for me. 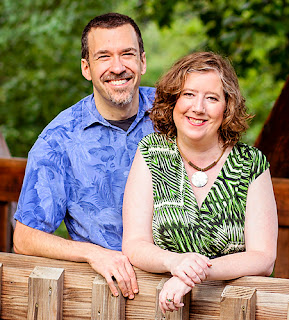 After 18 years of marriage, Brian and Juliet Freyermuth decided to try something crazy; write a book together.

Brian’s writing is not limited to print. For twenty years he wrote and designed games such as Fallout, Star Trek: Starfleet Academy, Epic Mickey 2 and Lichdom: Battlemage.

Juliet’s love for writing began with a fourth grade assignment. She has been writing ever since. Her writing took a new direction when she enrolled in journalism and met amazing people. Whether it is an article about anthropology or a hero’s journey in a magical world, she hopes to inspire readers to new possibilities.

When Brian and Juliet aren’t writing, they enjoy reading, watching shows like Persons of Interest and going on road trips with their son, Kyle.

Join me in thanking Brian and Juliet for an awesome interview!