THE ASHES THAT REMAIN by A. M. Griffin

THE ASHES THAT REMAINby A. M. Griffin 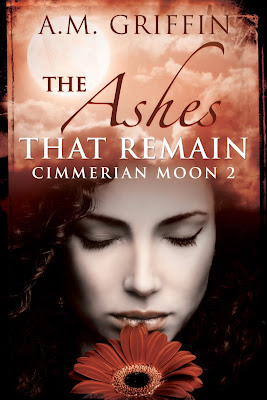 We’re at war against the aliens that have invaded Earth, fighting the only way we can—by surviving. I have more than most people do, but although I know it’s stupid to hold on, I can’t let go of what might have been—can’t help dreaming of something more. No matter how I tell myself it would be easier to do what everyone else wants me to, there’s a part of me that can’t give in.

Making the best of the situation is one thing. Settling, even to make other people happy, is something else.

Then we hear the alien mother ships have disappeared. Of course we have to go and investigate. What we find lands us in a huge mess that we somehow have to clean up and, as our little enclave is rocked to the core with even more changes, I’m learning a hard lesson.

The more things change—for the better or the worse—there’s no fighting human nature, and building on the ashes that remain will take everything we have. And maybe more.

EXCERPT
I can hear Dave talking from down the hall. As he thunders on I cringe. To be late for a meeting Dave called is a big no-no unless you want the evil stink-eye. And since I can hear him talking adamantly about something, I’m preparing for his wrath.

Mia moves behind Ian, pushing him in front of her. “You go in first.”

Not missing out on my opportunity for protection, I hide behind Mia. Maybe by the time Dave gets through chewing out Ian then Mia he’ll be too tired to cut into me.

“Mia, I sent you to get everyone over thirty minutes ago,” Dave says.

So he’s skipping right over Ian to Mia. I could either throw her under the bus or help her out.

Loyalty makes me step from behind her. “I’m sorry, Dave. I held her up.”

Dave glares at me. He’s an older man with grey hair and a big build and, although he’s usually good natured, he’s serious when it comes to Arrowwood community business.

I shuffle on my feet and feel the odd need to explain myself further. “I…um…needed her help with something.”

With a shake of his head he dismisses us, leaving Ian, Mia and I to take some open seats. Glancing around I can tell everyone is here. My mom is sitting up front next to Rocky and Rocky’s ten year-old daughter Brooklynn. Wade waves to me from where he’s sitting at a table on the other side of the room. He has an empty seat next to him and when he indicates to it I shrug. “Sorry,” I mouth to him. I want to take the closest seat. Moving across the room would probably only irk Dave even more.

“As I was saying,” Dave says, after we’ve found our seats, “Since the mother ship has left Detroit, we’re going to investigate to find out what’s going on.”

My breath seems to leave me.

“Are all of them gone?” I add. The last news report we’d seen said there were one hundred mother ships hovering over the largest cities of the world. That had been last May while we were still at band camp in Tallahassee. None of us knew if that number had grown less or more since then.

Dave shakes his head. “Unfortunately we don’t know. All we know is that the one over Detroit is gone, Jorin saw it take off while he was in one of the trees using his Ham radio. We don’t know if it’s gone for just a little while or gone for good. We’re forming a team to leave tomorrow at 1800 hours. Rocky will lead, MJ, Wade and Jorin are in.” Then he glances over to Ian. “How about you? Can we count on you as well?”

Ian glances at Mia before answering. If she had a problem with him leaving I’d expect him not to go. But she gives him a nod. Ian reaches out to hold her hand before he turns to Dave. “I’m in.” 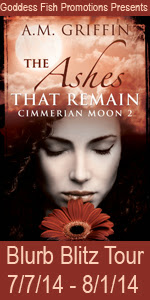 A. M. Griffin is a wife who rarely cooks, mother of three, dog owner (and sometimes dog owned), a daughter, sister, aunt and friend. She’s a hard worker whose two favorite outlets are reading and writing. She enjoys reading everything from mystery novels to historical romances and of course fantasy romance. She is a believer in the unbelievable, open to all possibilities from mermaids in our oceans and seas, angels in the skies and intelligent life forms in distant galaxies.

Subscribe to A. M.’s newsletter, and e-mail her at amgriffinbooks@gmail.com

And check out her other work, AGAINST THE DARKNESS.

This one time at band camp aliens tried to take over. Ouch.

And enter the rafflecopter giveaway.

Email ThisBlogThis!Share to TwitterShare to FacebookShare to Pinterest
Labels: A. M. Griffin, book tour, goddess fish, scifi, The Ashes that Remain, ya