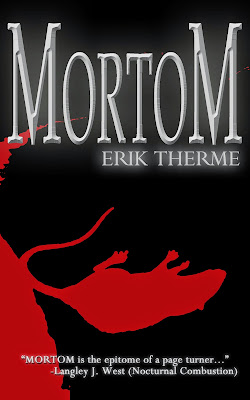 On the outskirts of town, 33-year-old Craig Moore is found drowned in the lake. A loner and town eccentric, few attend the funeral.

One week later Andy Crowl arrives in Mortom, still stunned by his cousin’s death and equally confused why everything was left to him. The two hadn’t spoken in years and shared little outside of fierce childhood competition.

But Craig hardly did him a favor. The estate amounts to little more than a drained bank account and a property overridden with junk. When Andy finds a dead rat under the refrigerator with a key in its mouth, he thinks it’s some sort of sick joke. Then he finds the letter left by Craig, written two days before his death ... detailing the rules of “the game.”

EXCERPT
The sound from the kitchen was so unexpected that it actually took Andy a moment to process what he was hearing: Craig was dead (the whole town had to have known this by now) and only a handful of people knew he and Kate were in Mortom, let alone inside Craig’s house. A ringing phone was the last thing he expected to hear.

“Wrong number,” he mumbled, but a morbid thought crossed his mind: what if it was for Craig? Some old friend calling out of the blue to say hello and catch up on old times. Whatever the case, he sure as hell wasn’t going to answer it.

He returned his focus to the leaves. Three of them, curled and brown, impossible to tell what type of tree they had dropped from. Undoubtedly, that would be a part of the puzzle. If they were indigenous to a certain part of the world, he had no clue how he was going to get that information—

“Come on!” he shouted at the phone. It was still ringing: short, intrusive bursts of sound.

He took in a deep breath, his concentration completely broken. The phone was easily on its sixth ring now . . . seventh . . . eighth. . .

He stormed into the kitchen and snared the receiver from the wall. “What?”

There was no response.

His brow furrowed. Someone had called the wrong number and now they were too embarrassed to speak. And what would they do next? Hang up and immediately call back.

“No one lives here,” he said, and started to hang up. A voice on the other end spoke up and Andy caught the last word: “—there.”

He fumbled the receiver back to his ear. “What?”

At first there was nothing, then a small laugh.

“Who are you calling for?” Andy asked, trying to keep his voice steady. “No one lives here anymore—”

There was a click. Andy held the phone a moment longer before returning it to the wall. Wrong number, that was all. Some guy calling his buddy without realizing he had misdialed. Mortom probably only had one prefix, and it would be easy enough to make that mistake.

He went to the living room window. The street below was deserted—no mysterious men in trench coats staring up at him from a corner phone booth.

“Stop being paranoid,” he told himself.

But deep down he knew he wasn’t being paranoid—not by a long shot. Things had been anything but normal since arriving in Mortom, and that phone call stank worse than the rat.

He started back toward the deck and jumped when the phone rang again.

This time, he let it ring.

~Add MORTOM to your shelf:

AN INTERVIEW WITH ERIK
-What inspired you to become a writer?

I was five when Star Wars hit the big screen, and there was no question it awoke my imagination. In the months that followed, I crafted everything from comic books to dioramas. As I grew older my interests shifted to music, and I soon found myself in a garage band. I enjoyed writing song lyrics more than playing guitar, and I don’t think it was a surprise to anyone when I quit the band and started my first novel. After that I was hooked.

-What draws you to your genres of choice?

As many authors will attest, you write the story you feel compelled to write, whether it be a mystery or a comedy. The challenge is aligning ‘creative aspirations’ with reader expectations. If you release a grisly thriller and follow it with a children’s book, it’s probably going to alienate some fans. Having an audience definitely influences how you approach future projects.

Small towns can absolutely be creepy. It’s very unsettling to wander the streets during the day and literally not see anyone.

-Which of your characters would you go out for drinks and/or pizza with?

I would definitely hit it off with (protagonist) Andy Crowl, mostly because he’s a thinly disguised version of myself. Yes, he can be a jerk at times, but he’s also extremely focused and passionate. He knows what needs to be done and isn’t afraid to do it. I can relate to that.

Never give up, and do whatever it takes to get your writing into the world. One week I had an agent tell me to write more like Gillian Flynn, and the next week I had Gillian Flynn’s agency interested in my manuscript. The world of publishing is a crazy, subjective place, and—more often than not—you have to make your own luck.

I don’t think I could write romance. I find it infinitely more fun to put characters at each other’s throats, as opposed to their lips or arms. Erik Therme has thrashed in garage bands, (inadvertently) harbored runaways, and met Darth Vader. None of these have come close to the thrill of releasing his debut novel, Mortom.

When he's not at his computer, he can be found cheering on his oldest daughter's volleyball team, or chilling on the PS3 with his 11-year-old. He currently resides in Iowa City, Iowa—one of only 7 places in the world the UNESCO has certified as a "City of Literature.”