BOUND BY A DRAGON by Linda K. Hopkins 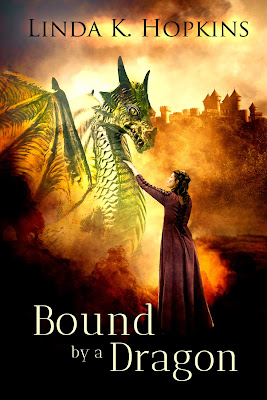 The dragon turned its head and seemed to look straight at Keira. Pulling her arm out of her sister’s, she drew herself upright and stared straight back, meeting the golden eye of the dragon before it turned its enormous body in a slow, fluid motion and lazily flew towards the mountains.

A dragon has moved into the neighborhood of Keira's small, medieval village, unsettling the residents as they fear for their safety. All except Keira, who is fascinated by the creature, both dangerous and beautiful. But when Aaron Drake decides to take up residence in his ancestral home of Storbrook Castle, set deep in the nearby mountains, Keira finds herself unsettled by the handsome stranger. Why did he decide to move to Storbrook, almost eighty years after it was last inhabited, and does the dragon really live in the caves below the castle?

EXCERPT
Keira watched as the great beast circled slowly through the sky, blocking the sunlight for a few seconds on each turn. Fire spewed occasionally from its mouth, dissipating in the cool air before it could set anything alight. All around her people were shouting, grabbing their children and running for their homes, slamming the doors shut behind them before barring them from the inside. Keira shook her head in amusement. A mere door wouldn’t stop a dragon – it could just burn the house down! Anna was tugging on her arm, shouting at her to come, but Keira shrugged her off.

The dragon had taken up residence in the mountains some six months back, and although it was regularly seen soaring above the village, it had yet to kidnap and devour a single innocent maiden. And there were no reports of girls snatched from the other villages, either. Keira knew the stories about the last dragon that had lived in the area. For many years it had peacefully inhabited its mountain lair, until one day it had suddenly turned on the village, burning down half the homes before being killed by some brave soul. But the only questionable thing this dragon had done was to take a few head of cattle and a couple of sheep. And since the dragon always left some form of payment for the animal taken – a small bag of gold, a few precious stones – the villagers didn’t complain too loudly. These payments always far exceeded the worth of the animal. But still, stories about dragons abounded, and the villagers were convinced that it was just a matter of time before the dragon set the village alight and snatched the village girls.

“Come on, Keira.” Anna’s words broke through Keira’s thoughts, reminding her that her parents shared the same fears as the other villagers. “Mother will be furious if we don’t get back to the house now!”

“Stop pulling me! I’m coming!” was Keira’s annoyed response. She glanced back at the sky one more time, admiring the way the scales of the dragon caught the light, throwing back a thousand rainbows against the sky. The dragon was heading away from the village, but before Keira looked away, it turned its head and seemed to look straight at her. Pulling her arm out of Anna’s, she drew herself upright and stared straight back, meeting the golden eye of the dragon before it turned its enormous body in a slow, fluid motion and lazily flew towards the mountains.

~Buy BOUND BY A DRAGON:

AN INTERVIEW WITH LINDA
-What made you want to write?

I love the way stories can carry you to another place and time, taking you out of the humdrum of everyday life and transporting you straight into an adventure that carries your along as an active participant. For me, writing allows me to take others along as we adventure together.

-What draws you to fantasy?

I have always loved the world of fantasy and make-belief. Fairies, elves, genies and, of course, dragons, draw me into fascinating adventures. Along with this, I love history, especially the social and cultural elements on days gone by, which differ so much to our technological age. In many ways they were much simpler, but at the same time, were much harsher. Throw a little romance into the mix, and for me you have the perfect story!

I think I would like to get to know Cathryn better. She is sensible and down-to-earth, but with a sense of humor. She is also a loyal friend.

Horror! I don't think I would be able to get into the convoluted mind of a truly twisted person. 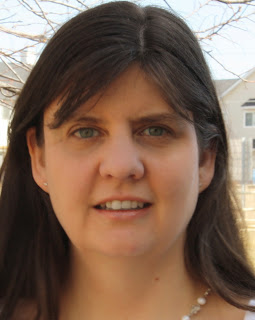 Linda K. Hopkins lives in Calgary, Canada, with her husband and two great kids. When she's not writing, she's usually reading (a great pastime when you are trapped in a snowbound landscape eight months of the year!), tinkering on the piano or just living life!

Get a load of that imagery. Awesome.

And enter the rafflecopter giveaway!
Win a $25 Amazon gift card.